Don't call me a jerk because I'm an extrovert.

There are some fundamental misunderstandings between the ideals of extro- and intro-version. Recently many articles and items have come out about being an introvert, how that works and the best ways to respect that. The rub lies with shaming the extroverts for being themselves. Turn about is fair play? Not really, since what we're looking at is the opposite of "treat others how you want to be treated." Granted this maxim should be "treat others how THEY want to be treated." However, until you know what that looks like, where do you start? Start with what you know. An extrovert engages others, not to "be an energy vampire" or "take the good vibes from everyone else," but because they're sharing what makes them happy.  How could I assume that someone wants the type of treatment that I would perceive as being callous, unwanted, and unloved? So the talks and comics that share with me the understanding that this different treatment *is ok* have been very important.

I've been working on myself (and I know many who don't) to recognize when that friends aren't talking to me, specifically, that they really are busy/tired/need down time, not ignoring. To ignore someone is to imply intent to disregard that person. I assume the issue lies in their needs, not my own, so I don't start making myself crazy over the idea of "did I do something wrong?" I trust those close to me to let me know if I really did overstep a line, rather than assuming I did.

It's been painful for the introverts that all this time extroverts have done all the wrong things to try to encourage them to be happy. It's been painful for extroverts, feeling that their introverted friends wouldn't want to talk to or see them, especially in times of need for either side. Now is the time to recognize without judgement each others' variable abilities to cope with- or need- stimuli.

So yes, thank you for letting me know the best way and place to meet you. I do, and always have, wanted you to be happy.
Posted by Corvus Cardia at 6:22 PM No comments:

I was having a nice chat with a young woman one evening and she mentioned her frequent experiences with spirits. In particular she told me about the occurrences at her father's machine shop. She and the other employee Joe* regularly find "misplaced" tools and equipment that will not work one day and fine the next. Occasionally when in a different part of the building she heard her name being called, would go back to the office but her dad Jack* had not said anything. It all sounded quite interesting, so I talked to him. While he hadn't experienced anything personally he definitely believed his daughter. We agreed that I'd visit the shop the next day and see if I could learn anything.

The warehouse is located farther out of town than I expected. The area is mostly flat livestock land, dotted with the occasional building or home and pine trees. This is old land in northern California, settled by the First Nations and invaded by Spaniards long before the Oregon Trail that brought many (including my great grandparents) to live near there. As it would turn out though, this particular spirit was somewhat more recent.

My dear sister Sai has been training her awareness for the subtle energies, so this was also a good exercise for her. She was driving so I had already shifted perceptions when we arrived. I hung back a little, listening to the spirit chattering at me while I watched everyone else. The warehouse was very noisy with working metal fabrication and cutting machines. The heavy, somewhat sharp scent of metal and oil permeated the air. When Jack asked me for what I was getting, my response was pretty humorous. I shared that this was a boy of about 12 or so who just loved the machines. I was so flushed with the spirit's enthusiasm that I started talking like him. "It's just so NEAT, look at it! Could you imagine?! This is so great!" I saw a cap on him that specifically brought to mind turn-of-the-century attire. He was mischievous in the way that a boy can be, the kind that would make his mum smile in fond exasperation.

Joe, an older man, then spoke up. He told us about a small cemetery not a 1/4 mile away, holds only about 50 graves, from the late 1800's. He also asked about "a woman wearing a blue dress" that he would see in a particular spot from time to time. From what I gathered from the spirit though, it was an energy impression of his mother but not actually "her."
Excited to see the cemetery, Sai and I went down the road. The cemetery was not visible due to another building in the way and it was set in a bit of a hollow next to the railroad tracks. Jack had asked if I could get a name. While the boy told me "Sam" I was extremely reluctant to say so as I have very little confidence in my ability to accurately translate names from the other side, if you will.

One of my sisters-in-law had shared with me her personally successful technique for finding specific graves. She is a genealogist and searching places with thousands of graves can be far too taxing without a little help. She would simply ask, "Show me where you are," and follow the intuitive pull. Sai and I walked through the gap in the ancient wire and wood post fence and stood there for a moment. I had told her that info and I wanted to see if she got the same pull I did. She pointed at the same corner I was being internally dragged to, but we set off slowly, looking around as we went.

The graveyard had no name and no wall but it was clearly cared for. Most of the graves had a flower, a few some other trinkets. An old hammer leaned against one headstone. It was a quiet place. The area we found ourselves was a family plot, appeared to be adult siblings with their children. The first stone that caught my eye was this one: 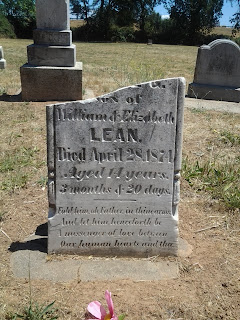 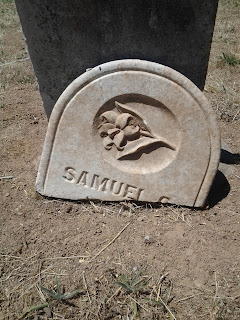 But we weren't quite done, it seems. Also part of this section, a few stones away was this one: 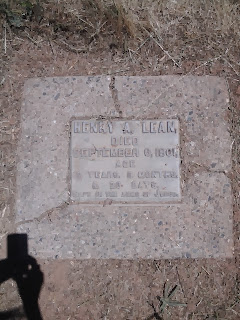 The name is different, but the age and years line up precisely. So, this spirit is still there as I was very specifically told to let it be. My sis and I have a few theories around this but I'd like to see if anyone else picks up something. I love these little mysteries, they're so much fun!

* Names changed.
All pictures taken by me.