In a word: Yes. However, this it not quite as black and white as it may seem.

The following is a message sent to me which I asked and received permission to discuss here. 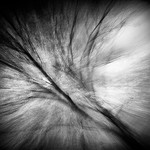 "A friend of mine is apprenticing to a practiced (atheist) blood sorceress - much of their work revolves around invoking daemons (with an "a") and their energies in lieu of deities. I would be fascinated to read how your (theistic) experiences differ/compare.
My understanding of the daemon energies, as she's explained it to me, are that the daemons are conglomerations of intense group experiences. An example given was a village was raided and desecrated, with the residents slaughtered, and as the last man lay dying he viewed the destruction of his home and neighbors and screamed with rage and agony - the release of angry energy became a daemon, no longer a reflection of the man but of the collective experiences of pain and tragedy of the village. These daemons will choose names from themselves and some will freely work with those who invoke them and perform the desired offerings/sacrifices (which can range anywhere from food to broken glass to the completion of a project). Some daemons are considered wholly malicious and a practitioner should avoid working with them.
Her experiences with the daemons indicate that there is some sort of afterlife, but she has not explored Underworld journeys and is, as I mentioned before, atheistic in her practices. She also does not believe in the existence of a soul, and so in her experiences and terminology the daemon are conscious energies.
...so long as respect is shown for my friend's personal path - many I've encountered on theistic paths have difficulty understanding her attraction to the work and I don't want to be the catalyst for a negative religious debate. I look forward to your thoughts."

I was absolutely fascinated by this information. Though I can well be considered a "hard" polytheist, I certainly do not insist that others have the same world view. It is also appropriate in my mind, that a follower of The Morrigan or similar energies of the Dark Gods and Goddesses (not that dark is bad, mind you, but we'll get to that point later) may have a... different... perspective than immediately rejecting what was described.

Some may have instantly recoiled at the idea of "blood" practice. I suspect as a culture our horror movies and stories have influenced the general perception of what blood practice can be, quite similar to the effect that The Malleus Maleficarum has perpetuated. Paganism in general has been striving to show its harmlessness to the greater population, at least here in the US. Therefore anything smacking of "blood" is often to be shunned. Let's break that down a little more though and clarify some practices. In this excellent post The Shield Maiden (another Priestess of The Morrigan) discusses historical concepts of blood sacrifices and brings "what counts" to the modern era, in particular the value of donating blood. From this we begin to see that there are difference approaches; known among some Norse practitioners there is the shedding of blood that seals an oath, whether that oath be to a deity or a person. Is this then, so different? We, not being in her place, do not know for sure so let's look at what energy might be called.

Concepts of daemon creation: what I See is a little different- that an entity may take the opportunity provided by the opening of the Veil and massive release of energies to cross to this plane. In my experience and those I have talked to regarding this, there is indeed a "soul" factor to the deamons which can be removed from the negative energies, in essence they can be "killed" and the soul sent on. There is also the concept that they are all not the same; that some of the entities evoked by tragedies are not hateful in nature. I do not have personal experience of this, but She does.

Those of vengeance and retribution may cross and some are more discriminate that others. Places where people have rebuilt after destruction are often inhabited by Spirits who would protect those there, but who do not remove the lingering pain.

I sense that what this woman may actually be calling on is aspects of the energies which we often see embodied by Kali, Odin, Badb, in the form of smaller beings. Many may mistake the power they do not personally resonate with as being "bad." I do not *know* this except for what I Hear from Her. This also fits in with my view that there are many, many methods and angles to See, such as mentioned in the proverbial blind men and the elephant.  Whether a particular entity is a "daemon" may depend, at least in part, on one's own point of view. 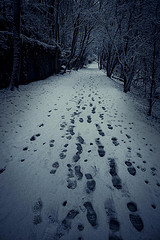 The so-called Dark energy, referring to that of death and the Dieties who manage it, is often fearful in aspect. The darkness also refers to those events in our lives where we cannot See the way, the fog of pain mental or physical. While these Deities may not "light" the way (which creates shadows), They can teach us how to find the path, to use all of our faculties, to overcome with our own Will.  Does one need to "believe" in the gods to learn this? Of course not. Whatever means one may employ to achieve a given goal, the keys to success are knowledge and awareness.  One does not necessarily beget the other so strive for both. Ever expanding Self-awareness is how one can begin to See more of the elephant. Don't settle for the tail.